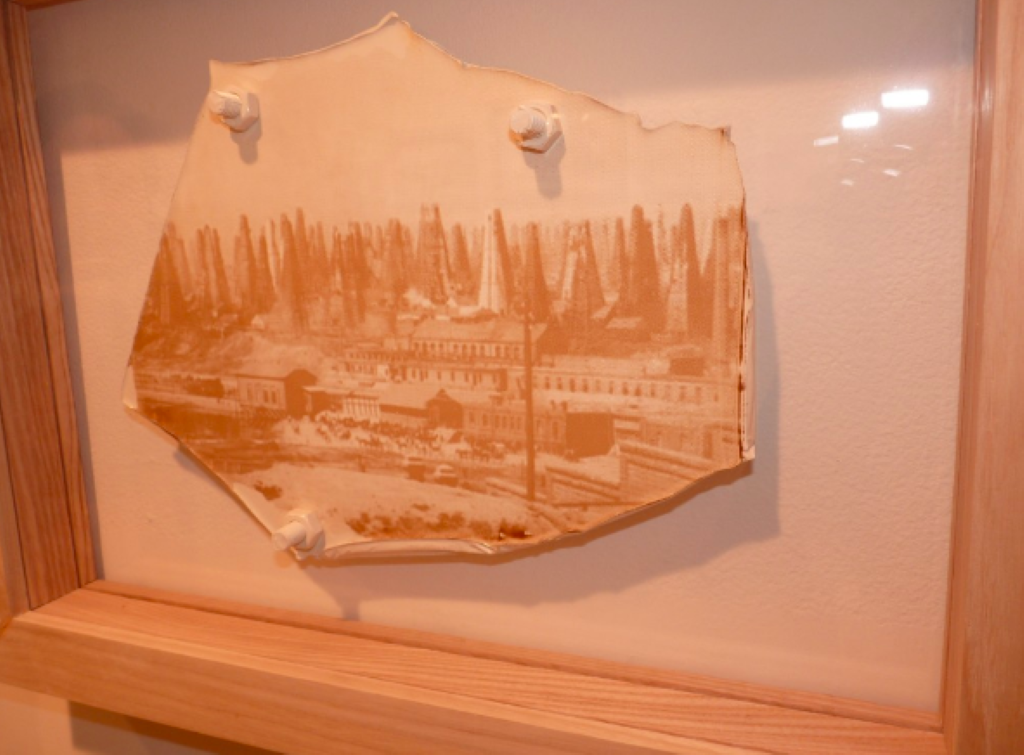 At an opening on Jan 29 at the David Krut Projects Gallery at 526 West 26 Street, Jessica Carlisle and Krut introduced British artist, Piers Secunda, 38, and his “Archived Oil”:

Artists like painting in oil paint, but how about crude oil – as paint? At an opening on Jan 29 Thu, the big night in Chelsea, at David Krut Projects Gallery at 526 West 26 Street #816 (Tel 255 3094), Jessica Carlisle and Krut introduced British artist, Piers Secunda, 38, and his “Archived Oil”.

The show is an extension of Secunda’s unusual path of exploration in art, one of using the medium itself to make the message. Known for using hardened paint in 3d to form variegated and colorful sculptures, his latest inspiration since 2008 is to use crude oil itself to evoke fleeting historical moments in oil exploration and signal their vast impact on world culture.

Messy and primitive work in the days of wildcat discovery in Canada and the US, but black gold will richly reward their efforts

The unusual artworks are faded 19th Century and early 20 Century photographs silk screened with crude oil and varnish to make resonant images of the early days of the oil industry, using the specific crude oils from the fields and wells which the artwork depicts. Secunda’s work involves extensive tracking down of the primary material,
often on eBay. As mementos of drilling strikes which have changed the world, the artworks tell the story of the oil age in its own medium, bringing home a sense of how the material which replaced whale oil to light rooms has invaded every corner of our world on land and lately, in vast gyres of plastic garbage, the sea. But Secunda, whose art is
apolitical, does not emphasize the dark side. “I try very hard not to take a political position. I am not equipped to do so. My aim is to make a visual record.”

The birth of the oil industry goes back to primitive 19th Century scenes, but silkscreened in the oil they found, they gain new presence in the eye of the beholder

Piers’ work will be on display through Sat February 28, 2015, with hours from Tues to Sat, 10-6pm, attended by Miranda Leighfield and Meghan Allynn Johnson. It is in line with his remarkable previous work making colorful sculptures purely out of hardened paint, casting the component parts and then using industrial fixtures also carved from paint to hold them together. That fifteen years of work extended through abstract “paintings” in various forms and shapes to carved models of a Chinese Wrench and a Clamp formed out of industrial floor paint.

Secunda as an artist reasons that crude oil plays a fundamental role in every aspect of 21st century living and is the main component of the world’s most used material, plastic. If crude oil is the world’s ultimate facilitator, he says, it must therefore be a contender as the ultimate artist’s material. “To me, it’s the texture of the twentieth
century. Why not deploy it?”

An earlier work was carved “with slightly Buddhist patience”, says Secunda, from hardened industrial floor paint
into a series of 13 hollow balls, one contained within the next, a feat which took Secunda two years to complete
the first time (now in an edition of 10, with two artists proofs. “I got a lot better!”) The work is done by lining up a
hole in each sphere so that his tools can reach to the core, where the last ball is the “size of a garden pea.”
Carving the ones six or more layers down is “incredibly hard because you can’t really keep them all in place.
The slightest movement of your hand shuffles the layers and they move. I tried to complete it on an aeroplane. I had three hours and I couldn’t do it.”

His photoworks range from Baku in Azerbaijan, and Spindletop in Texas, to scenes of California, and Colorado. After finding an image of Saudi Arabia’s first successful oil well, Dammam Number 7, Secunda searched for two years for oil from that specific well in order to silkscreen the photograph. The resulting crude oil print tells the story of a moment which had a seismic effect on global economics – the instant the well blew, in 1937, after 13 years of struggle by desperate wildcat prospectors running out of cash and hope on the desert’s sandy griddle.

In case anyone might think this a gimmick designed to sell to the walls of executives in the oil industry, the artist confirmed that he had never been offered any money from oil companies. On the contrary he had found his inspiration in “looking for a material which could be made to work like a paint but which would bring geopolitics into the work simply by its presence. Up till then the work I had been making was about the developing of an abstract painting practice and very introverted in its focus. I felt it was too busy ignoring the activities of world outside the studio, for my
liking.”

The result is finer than the oil industry probably deserves, in fact, given its impact on the environment, notably the vast circles of plastic trash in the ocean, of which there are now eight in the world. But Secunda does not intend any specific environmental comment. He is purely an artist in his preoccupation, which is actually a combination of performance art and painting given the strenuous efforts he has to make to locate the right crude for a particular picture. He finds dealers on eBay, in one case using oil contained in anniversary paperweights from the major oil company who made the
big strike.

An artist, not a critic: “I have felt for a long time that the most significant thing an artist can do, is to make a
record or statement about the time in which they are alive. These works, like the more severe works that I have
made, record fleeting moments of potent human activity which have affected or altered the direction of modern history.”

Secunda himself explains: “I had just started reading Daniel Yergin’s ‘The Prize’ when I thought of painting with crude oil, so bought some specimen samples on ebay and started experimenting. Very quickly it became clear that crude oil could be fixed and it flowed very effectively from a paint brush. The current works grew out of shards and sheets of poured floor paint, which I painted and spattered with oil. I produced these to generate material for assemblages, which was my direction at the time. The individual fragments looked really good on their own, so I started to mount
them on the wall and think more about imagery that was appropriate to them.

“The first oil I laid my hands on came from a place called ‘Oil Creek’ in Pennsylvania. When I researched it, I learned that it was the source of the first oil rush. As a further experiment I tried to print some images of Oil Creek and in the process taught myself how to make silkscreen prints. Since crude oil is the primary material of our age, and since we’re in the midst of the petro chemical age, which largely defines and enables most human activity, why not use it to record what we’re doing?”

His initial inspiration to merge crude oil with early photos was fueled by his discovery that the invention of kerosene (paraffin) from puddles of crude occurred about the same time as usable photography, most effectively in southern Poland, where Ignacy Lukasiewicz began distilling lamp oil in 1852. “These oil prints started with oil from, and then imagery of the early days of the oil industry, so I’ve covered some of the visuals which relate to it but the subject matter is rolling slowly forwards in time and away from this. These works are starting to gradually build up into an visual archive of the oil age. It just grew that way.

The core of his approach: “I have felt for a long time that the most significant thing an artist can do, is to make a record or statement about the time in which they are alive. These works, like the more severe works that I have made, record fleeting moments of potent human activity which have affected or altered the direction of modern history.”

The result is work which resonates deeply and more loudly than a photograph, but which to our eye retains decorative value for the walls of the home and offices of those in the industry who should be especially interested in buying his works. Were some expected at the opening? we asked him before the crowd arrived. “Email invitations have been sent out far an wide, so it’s inevitable of course that some oil people will click with the works and may come to see them, but the work hasn’t been made for their benefit. If some come to the opening, that’s their call, I suppose.” But, he emphasized again, there was no environmental angle for him. “I’ve never taken a political position in any of the work I’ve made. The presence of crude oil in itself is political, because oil is inseparable from politics and environmental issues, but the works don’t take a political or an environmental position. They just record.”

Piers Secunda, 38 (his distinguished name sounds like a painter from the Italian Renaissance, but in fact it is derived from a Polish border town now obliterated by war) lives and works in London and New York. He studied painting at the Chelsea College of Art. His recent exhibitions include ‘War Stories’ at the William Holman Gallery, New York, 2014, a group show curated by Anthony Haden-Guest which included Secunda’s bullet hole works, where slabs of imitation wall are pock marked with the exact reliefs of bullet holes he collected from scenes of violent events in the Middle East, including a Taliban attack on a Kabul guesthouse for Indian doctors.