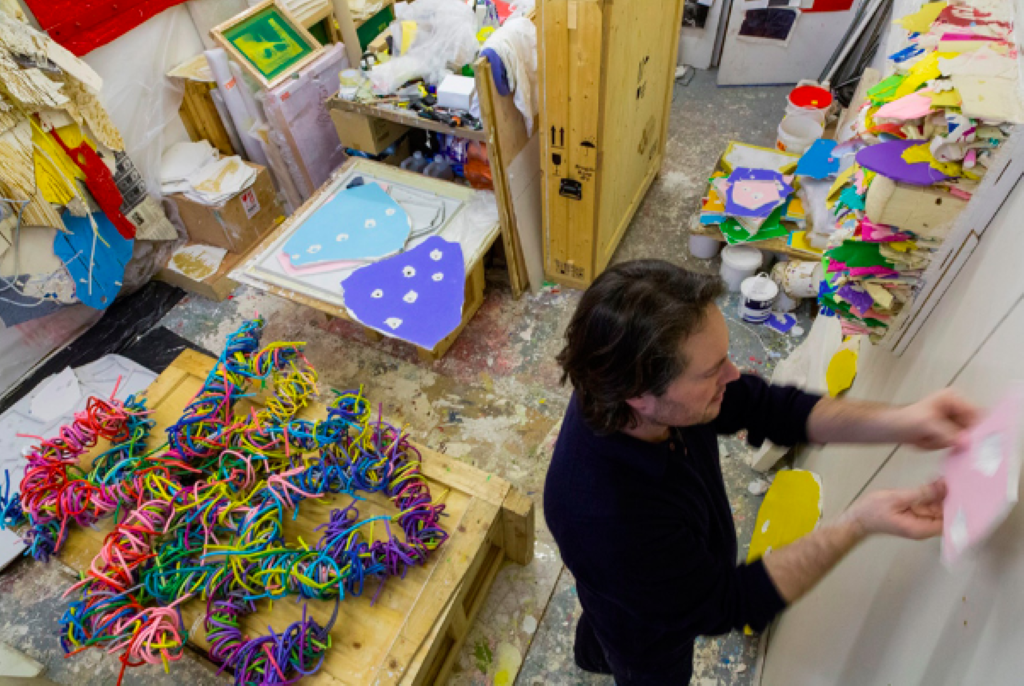 Since 2009, when Secunda and his interpreter encouraged soldiers from the Chinese Army (PLA) to shoot some works for him on a firing range near Shanghai, the artist has travelled around the world to gather bullet holes, both cast and shot. The China works started an ongoing series which continues to run, and which in 2010 took him to Kabul, Afghanistan, to mould Taliban bullet holes from suicide bomb sites. The resulting works have been described by art book publishers Phaidon as “the most compelling works to have come out of the Taliban conflict.”

This wide-ranging exhibition covers Secunda’s renowned “Bullet Hole” series – in which his practice incorporates bullet holes shot and cast in some of the world’s most notorious danger zones, including Afghanistan and the no-go neighbourhoods of Kingston, Jamaica – to his most recent assemblages and crude oil silk screens.

The comprehensive showcase provides an insight into an extraordinary and stunning studio practice, which records some of the most important social and political practice conversations of our time.

The works in the retrospective range from simple moulded forms to intricately detailed, hand-held objects with multiple moving parts, such as the Chinese Puzzle Balls – the common theme across the exhibition being that all the works are made out of paint.

Over 17 years Secunda’s artistic practice has evolved around the use of paint as a sculptural medium, and has resulted in highly complex structures created from paint alone. It is the combination of innovative techniques within a powerfully symbolic setting that sets this method apart. Secunda’s work is often steeped in forgotten histories and laced with geo-political references, such as printing with crude oil, ultimately producing work full of rich narratives – while simultaneously pushing paint to its absolute limits.

“I have always been bothered by the physical restraints of the canvas. For me it limits what a painting can be, so I’ve disposed of it and I handle the paint on its own – by default the paint behaves like a sculptural material.” Piers Secunda

In June 2012, Secunda went to Jamaica to mould bullet holes made by the Jamaican police and army during the drug wars which erupted in Kingston in 2010 at the cost of some 200 lives. With unprecedented access to cartel heads, gang leaders and local hit men, Secunda was able to record the recent violence in his art – and even persuade the criminals to shoot surfaces from which to create his work.

Increasingly aware of how contemporary lives are entirely facilitated by oil, and setting out to record the petro-chemical age with the oil itself, Secunda was able to make crude oil behave like paint and began to screen print images in 2009. The works portray the defining moments of the petro-chemical age – using oils from the locations portrayed in his prints.

The crude oil project will span Secunda’s lifetime – and will cover the key moments in the defining material of our age. His project reveals little-known world-changing moments such as the first discovery of oil in Saudi Arabia in 1937 (Dammam No. 7), an event which dramatically changed the balance of both politics and economics.

Piers Secunda – A Retrospective also features several assemblage works and editions. Secunda’s assemblages are unique works in paint. They have been part of the practice as it has evolved over a decade and a half. Varying in size from an 8cm ball (“Painting of a Chinese Puzzle Ball”, below) to a 1m cube consisting of every rejected work from his studio over a period of a decade, the works push the limits of his practice and show us the potential for paint’s diversity.

Chinese puzzle balls were traditionally ornate ivory carved craft and trade items consisting of spheres within spheres, each rotating freely though carved from the same block. Completing the puzzle requires the holder to line up the 13 exterior holes through all of the 16 concentric spheres, to the centre. Secunda’s puzzle ball is  made entirely of paint, is 8cm across and 16 layers deep. A two minute film was created about this work, including an interview with the V&A’s Asian Department Curator, Julia Hutt.